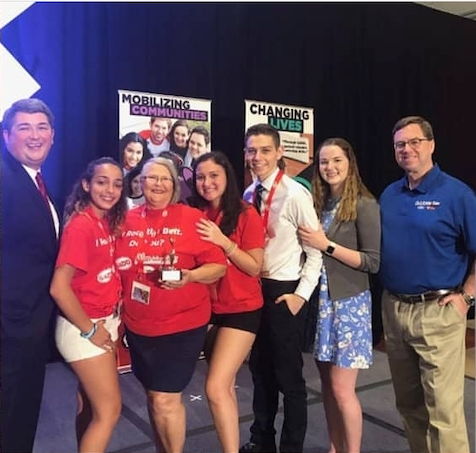 Cape Coral, Fla., – Students Against Destructive Decisions (SADD) announced the winners of several national awards designed to promote youth health and safety at their 2019 National Conference. SADD presented their Shining Star Awards to leaders in the fields of traffic safety, substance abuse, and youth personal health and safety during their Awards Luncheon at the Hyatt Regency at Gainey Ranch, sponsored by Ford Driving Skills for Life.

Cape Coral High School SADD was named Chapter of Year, recognizing them going above and beyond in the 2018-2019 school year. Cape Coral High School (CCHS) SADD chapter was very active throughout the year, participating in SADD National programs and events such as Rock the Belt, Text Less Live More, and creating events in their school to encourage safe and positive decisions among their peers.

Awards were also presented to the following individuals and chapters:

“We are honored to be able to celebrate the many individuals and organizations whose work supports our efforts to empower teens, engage parents, mobilize communities and create the change we deeply desire,” said Rick Birt, SADD President and CEO. “Without them, we would not be able to do what we do each and every day.”

SADD, the nation’s premier youth health & safety organization, works to empower teens, engage parents, mobilize communities, and change lives around the issues of traffic safety, substance abuse, and personal health and safety. Through a national network of peer-led chapters in middle schools, high schools and colleges, SADD equips students with the resources they need to advocate for change in their communities. Join the movement by visiting www.sadd.org, and follow us on Facebook, Twitter, YouTube and Instagram.

‼️ Call the number on the Blue and White Emerg

DM us some pictures and a description of your work